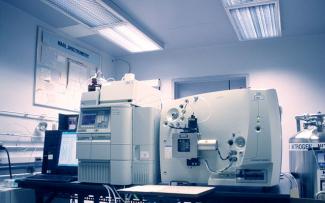 The Mass Spectrometry Facility is part of the Shared Instrument Facilities of the Department of Chemistry. It provides low and high resolution mass spectra to Penn Chemistry and to other research groups throughout the university community for the determination of elemental composition and purity of a wide variety of compounds. The facility director is Dr. Charles W. Ross III. and is comprised of the following: